Google Cloud Next 2019: Is Internal Communications ready for AI? 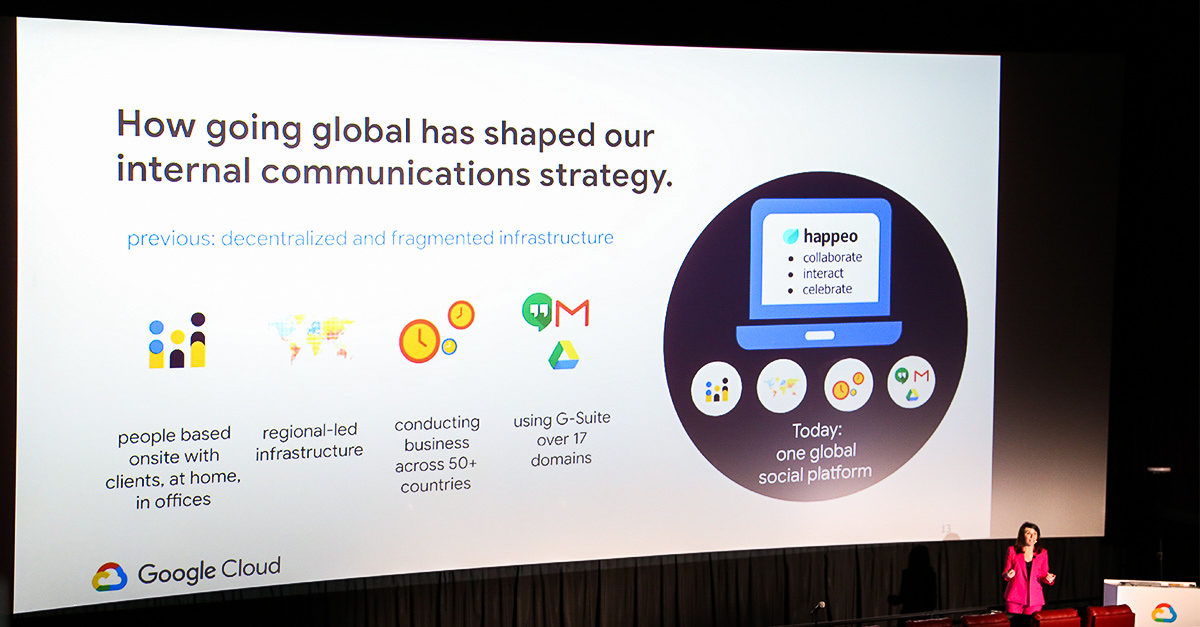 Google Cloud Next 2019 is well underway, and Google’s own keynotes offers a host of inspiration to the field of Internal Communications. G Suite received numerous updates and exciting reveals – one of them being that Gmail will integrate fully with Chat, bringing email and dynamic communication together in one place. Key among the new stuff was the addition of an Artificial Intelligence (AI) enabled assistant in G Suite.

A voice-based tool now works specifically with Calendar, allowing you to ask where you’re supposed to be, and when. Voice, Google Cloud’s telephony service, also became available to G Suite users. As a bonus, an AI-addition can transcribe phone calls and automatically block spam callers. The power of AI is becoming mainstream, and incorporated in fields we never thought of before. This got us thinking:

Is Internal Communications prepared for AI?

Roughly speaking, AI can be divided into three categories:

Computer has an intellect that overwhelms human mental capability, and is many times smarter and faster than people, on every level. Imagine this: intelligence that can solve complex issues derived from globalization to nationalism, from wealth to poverty – all by the flick of a wrist.

We’re now seeing an influx of practical Artificial Narrow Intelligence applications – Voice that transcribes calls, Calendar that tells you where to go. It’s not crazy to think that AI has a lot to offer for Internal Communications. If you use a digital platform for Internal Communications purposes, you’ll have a form of analytics. Those analytics are simply a digestible, visual representation of data from the database of your tool of choice. Usage, reads, likes, advocacy, page visits, influencer metrics – all things that become clear when you use tools like a social intranet. An AI assistant could start recognizing patterns in communication and predict “gaps” in your communication or engagement program. If it notices your style of messaging doesn’t engage employees in a certain office or country, to name an example, it could then start making recommendations to make sure everyone is as engaged as you want them to be. It’s a made-up example, but it isn’t far from the realm of possibility. Another one: what if we apply Voice’s AI technology to automatically transcribe town hall meetings into a post on your G Suite-based social intranet? The possibilities are endless, but in order to capitalize on these near-future capabilities, Internal Communications needs something it’s sorely lacking. It needs a database.

Bare with me here: I’m about to talk about computers that have brains. Ready? Machine Learning algorithms make use of massive databases (often referred to as “Big Data”) to predict future patterns. Have I lost you yet? Let me make this a bit easier to digest: A computer’s “brain” can’t learn Spanish by watching one episode of a telenovela. Have it binge watch an entire season though, and it will start forming a model of what the language is like. It will start to recognize patterns, and form a basic understanding of the language. Now imagine that instead of one season from one telenovela, it’s fed every season of every telenovela created in the history of mankind. The result? Muy bien señor. The computer’s “brain” will start to predict how it should speak Spanish. The computer will start checking it’s predicted version of Spanish by cross-referencing it with the massive database it was fed, allowing it to learn, resulting in a computer that can habla Español in no time – because unlike humans, a computer doesn’t need rest, matcha-tea lattes or mindfulness to function.

What just happened is that an algorithm (the computer’s “brain”) was introduced to a massive database (all telenovela episodes in mankind’s history), from which it could learn. That’s Machine Learning, and that’s most forms of Artificial Intelligence today. That’s also the reason Internal Communications needs the database we mentioned before. An algorithm can always be developed, but building a rich set of data takes time.

Will Internal Communications be automated away?

Machine Learning has a lot of implications for business today, so too for Internal Communications. It can take care of a lot of mundane, monotonous tasks. Tasks that are prone to human error, or human judgement. The “human” factor isn’t something that can be automated. Our emotions and thinking are so complex that I don’t know if there will ever be a database big enough to teach a computer to act like a human. Ironically, in a world that’s becoming increasingly digital, Internal Communications needs to be increasingly human – they just have handy tools to help them focus on that. Strategy, change management, employee engagement, company culture, employer branding – all forms of accelerating company growth from within. All are vital to business today, and none can (yet) be replaced by machines. The human touch is key. With the right databases, the future is Next.