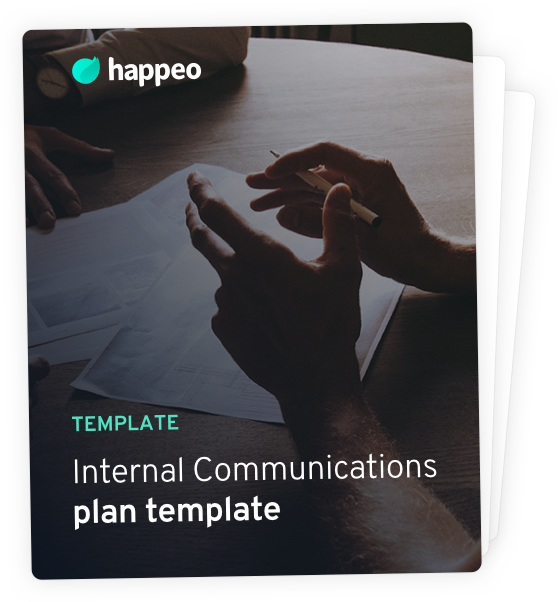 This template is a construct of Daven Rosener's decades of experience in Internal Comms planning.

The language of Internal Communications is all-encompassing, looking towards the greater good and harnessing the power of the crowd to make changes large and small for an organization.

The tactics, though, can be quite office-based: it’s about intranets, screens in the kitchen, posters in the elevator, town hall meetings where you have to be present to be involved.

All of this can be somewhat alienating to those who aren’t based in the office — and it can be downright unhelpful for those businesses whose staff are largely out there somewhere in the world.

Making things worse is the term “remote worker” — in today’s knowledge economy, the remote worker is often thought of as those guys and gals based in small enclaves in cool coworking spaces or the Very Modern Startup team that works from home but is connected by technology. It’s relatively easy to get those guys involved in discussions when tools such as Slack and a remote work intranet are there to make life more connected.

What, then, of the field workers of this world? The salespeople always on the road? The bus and truck drivers? The pickers in the fields and the assembly staff in the factories? All of these employees deserve top-notch Internal Comms, too, yet one of the biggest Internal Communications barriers has, for years, been the ability to engage remote and field workers.

“Hard to reach employees” are forever an issue

“When I went to the launch of the last State of the Sector report at Gatehouse in January, I was quite annoyed as it was the same issues on the list of Internal Communications barriers that I’ve seen for more than 10 years, and the priorities did not match the barriers which was equally frustrating,” says Jenni. “If you have these Internal Communications barriers and you’re not prioritizing how to overcome them, you’re just doing other stuff that is not helpful.

“This isn’t new, and we’ve got to do something to move this conversation forward. We can’t keep putting it in the “too hard” pile. We have it in our gifts to change this stuff. That was the driver for me with this research, thinking this can’t be on the list for another 10 years.”

The research in question forms the crux of the Remotely Interested report, released in 2019. Jenni and Benjamin looked at content, channels and engagement, creating a question set that would allow them to cross-tabulate to really delve into what channels were best, how important the line manager really is, and whether there was any correlation between content and channel.

They spoke with employees from seven organizations, ranging from the public sector to hospitality and engineering — the likes of Siemens, West Midlands Railway, Devon and Somerset Fire and Rescue Services, and Kuehne + Nagel. The data revealed how these non-desk-based workers really feel about the Internal Communications being pumped out from HQ — and some of it conflicted with what Internal Communications specialists see as barriers.

The big thing that did emerge, though, was that even for remote workers the intranet and company website are the go-to channels for information about the organization they work for — and that remote workers do not want to feel like they’re being forced to consume communications. The Third Space — those spaces they use to convene, like the kitchen or sitting area — is an especially protected environment, as it’s where workers go to relax and chat with colleagues.

Where you choose to communicate with people are important, says Jenni: “Don’t be intrusive. If you’re going to encroach on the Third Space for workers, make it optional. You can put a noticeboard up, put some magazines in there, so it’s their choice to interact and it’s not forced upon them through a digital screen.

“The content is so important,” she continues. “If you want them to join a group, you need to think of how you do it so they want to join, but that it’s not too noisy and it suddenly interferes in their day-to-day.

“One of the main things we found is that remote workers just want to be listened to. They care about customers, about service, but don’t feel they are listened to. A lot of the stuff coming from the center, especially in highly unionized environments, is seen as propaganda.”

Jenni found a big gap between how those in head office and those on the front line behave, even down to the language they use. In her survey, she used the term “organizational news”, and respondents didn’t know what she meant — they use the word “company”, not “organization”.

Ultimately, though, it comes down to knowing your baseline, having a solid strategy, and executing well. Research and analytics are integral to keeping your finger on the remote worker pulse.

“Our data shows it doesn’t matter what channel you use as long as you do it really well,” Jenni says. “No one channel is better than the other, but digital channels alone won’t solve the problems. You need to invest in the skills of individuals and do things together. Think about the stuff that’s really going to make a difference, and always start with insight. You’ve got to have the data to give you the benchmark. If you don’t start with that, you’re just making it up and that will never be the right solution. You can’t have an Internal Communications strategy based on your opinion. The data gives you the opportunity to have the budget conversation.”

Giving employees — be they desk-based or remote — a choice in how they communicate and receive information is clearly important. A mix of digital and analogue tactics can work as long as you bear in mind the “don’t intrude” ethos that came through in the Remotely Interested research. The best way to reach remote workers is through technology — an app for the intranet on their smartphone, Slack groups and Intranet channels can give “working together” a whole new meaning — but it needs to be used on their terms. Encourage remote workers to take part in groups through gamification, demonstrating that colleagues are also in these discussions, but importantly you need to show their voice is heard, understood, and that it makes a difference.

With concerted effort bringing remote workers into the fold, perhaps that Internal Communications barrier will start to disappear from the State of the Sector report.