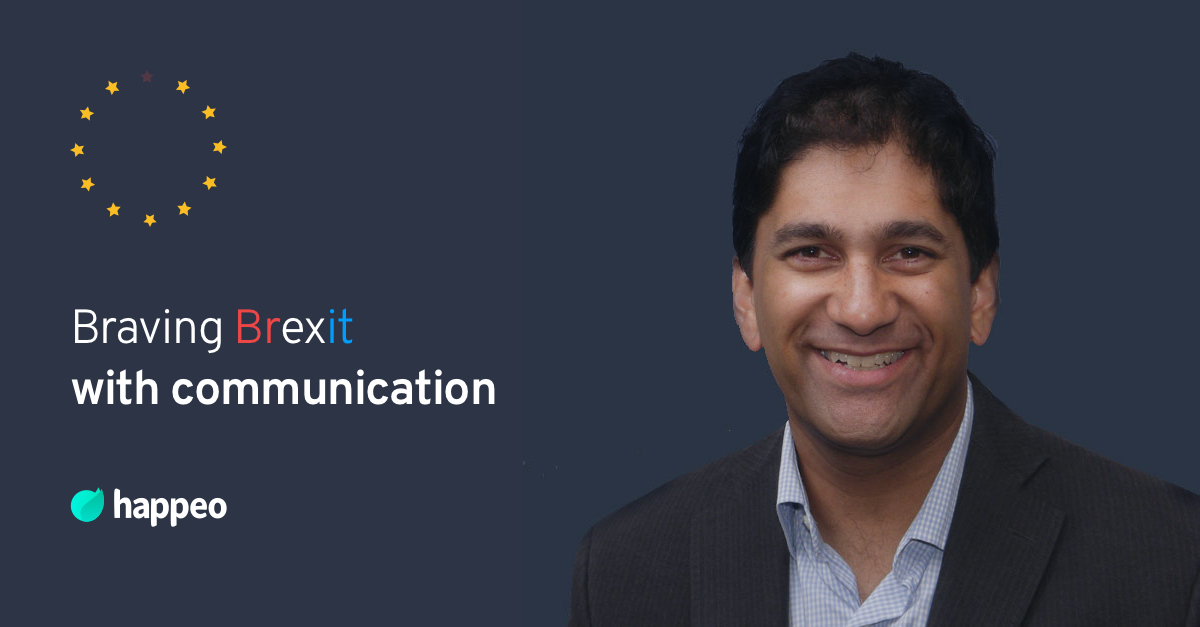 “Change is the only constant in life”, said Heraclitus. It still holds true today. Advanced as the Greeks were in their time, I doubt any of them predicted what would happen on June the 23d, after the UK held a referendum to leave or stay in the EU. Suddenly, Great Britain faced a huge divide – that with the world, and itself. British citizens - and business - have been plunged into uncertainty. So how can you deal with an impending change that’s this massive, and wholly driven by external factors? Where do companies look for guidance? As it turns out, there isn’t a template or definitive guide that anyone can follow. But when it comes to dealing with communications around Brexit - internal and external - look no further than our third podcast guest, Sanjoy Mukherjee-Richardson, former Brexit Communications Lead at Hiscox plc.

Listen to the podcast here, or on your favorite streaming services here.

The business effects of Brexit

Sanjoy speaks to his previous experience as Brexit Communications Lead: “Every day was very much a different day. On one hand you would review how Brexit would impact policies. In another you would work on restructuring units in countries like France, Germany or Spain, or you would be looking at a merger. Sometimes redundancy came around the corner. A lot of it came down on the reputational and performance impact of what we’re doing. Reputation is particularly important: internally or externally, a company stands or falls based on its reputation.”

One of the main questions that Internal Communicators and business leaders are asking today is “How do we prepare for Brexit, and is that even possible?” To this, Sanjoy advises: “What do businesses need to be prepared for? To be honest, anything. Throughout my experience of preparing companies for Brexit, a lot comes up. Sometimes it’s something legal flags up that no one thought of, or sometimes it comes from the political or governmental sphere that no one had taken into account. Most companies I know are preparing for a hard Brexit, but if that changes to a soft Brexit, a lot of companies will have to backtrack and even change some of the new structures they’ve put in place. But even then, if a softer Brexit happens, we’ll have a two-year transition period with the European Union. After those two years we could still end up with a significant change. So the nature of change is evolving all the time, there is no template or role model that companies can look up to and legal and governmental issues pop up all the time. There are certainties – the things companies need to keep focused on are performance and growth.”

Brexit for employees and leaders

Speaking further on employee communication during Brexit, Sanjoy says: “The other thing was around the mood and motivation of employees. We did regular feedback activities with employees where they could voice their concerns – we also had standing up channels where employees can voice their thoughts or concerns regarding the Brexit program. That’s the thing senior leaders are looking to hear: what are the hot issues that are going to affect performance, customers and reputation.”

The amount of news released around Brexit is unparalleled, and on one hand feeds fatigue - on the other concern. How can you deal with Brexit communications from an Internal Communications approach? Sanjoy says: “There are various approaches to take. One particular company I worked for would not respond to any rumours or ‘leaks’, because they felt it would ‘fuel the news cycle’ lest it’s a substantive leak. Their blanket response was ‘we won’t comment unless we absolutely have to’. When it comes to Brexit, it’s a little bit of both. Don’t comment on everything around Brexit, because people get quickly bored with it. But do comment on relevant Brexit news for employees, customers, suppliers, stakeholders and service providers, and target what you’re talking about. If you have an operation or a service center in a particular country, for example, and employees there have a concern around their jobs there – then target your communication there specifically.”

Brexit: bravery in times of uncertainty

The hectic nature of Brexit means you need on-the-ball responses to employees. As Sanjoy states in the podcast, some companies have opted to come out and say “no matter what happens, we will make sure you can stay here with us.” After that was met with uncertain response - namely in the form of concern for foreign family members - that same company then came out and extended that courtesy to family. While there is no definitive guide on dealing with Brexit for business, clarity, bravery and a proactive approach are unmissable.

Internal Communications is uniquely positioned to play a key role in getting through the Brexit divide. Find out how in the podcast.