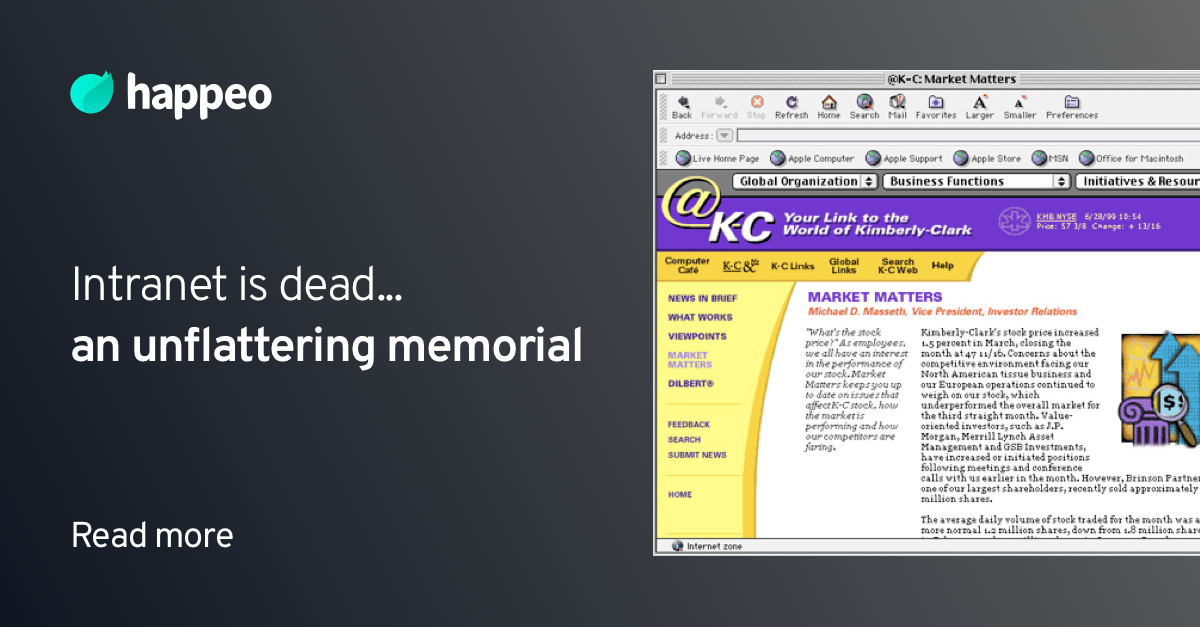 See how an intranet works

Learn how an intranet works with this short video.

We are quick to abandon technology when something better comes along, think back to any product that has been escorted to extinction by popularity shifts...

If you said VHS, the Walkman, or pager - those would be some great examples of nostalgic tech. Intranet platforms don’t fit into this pleasantly reminiscent category however, because these three were loved by the majority that got to use them, whereas the intranet? Well that’s an entirely different story.

Inspired by the famous Tim Berners-Lee invention of the late 80s, an intranet was the idea that a company or organization could have their own webpage, for their eyes only. Everyone in the office could access this information repository from the 20 kilos of screen on their desks. At the time, this was useful - and the web pages would host some content which would do the job, and wouldn’t look too much worse than the rest of the web did at that time.

As intranets continued to be used, the content that could be hosted on them became less and less relevant as more dynamic web apps were being propelled into the spotlight. The web was the grass that was greener, and due to intranets being self-built, or using outdated software - it became difficult to update and maintain, leading it to be slowly forgotten about by employees.

It’s easy to blame the teams that maintained these networks for their lack of success, but in truth - many apps were built as an after-thought for the main products that live on the actual internet. Intranets were also made without the needs of Internal Communications and IT at its heart, what people needed, and what was provided to them by vendors were not the same thing. Something that was required to be accessible, and human-friendly was decidedly laborious and difficult to use.

This dissatisfaction was proved in 2013, despite most workplaces using an intranet, only 28 percent of employees rated them from ‘good’ to ‘very good’. This is a problem, as the idea of an intranet is something that most companies need. All colleagues have a need to share and access information but if they have no outlet to do comfortably do this in - many turn to ‘shadow apps’: software that isn’t regulated by IT teams such as external social networks, or other web hosting pages to keep resources.

This intranet rebellion causes many problems for the modern enterprise when it comes to keeping data safe, secure and accessible to everyone. Self-created knowledge bases are normally only shared within closed teams, meaning the information is not accessible to the wider organization which creates silos. That’s without even mentioning that when the creator leaves the company, their work in many cases disappears with them. Research has proven that poor knowledge transfer can negatively affect workplace productivity, so what are we doing about this?

We’re calling out the death of the intranet, or at least as we know it now. The service which has only ever been a second-rate priority, has the potential for unifying workforces as diverse as they can be, and bringing true communication and collaboration through a pleasant - not outdated, experience.

Imagine if there were fewer barriers between you and your ability to record your great ideas, chat them through with colleagues, while having all of your company’s knowledge at your fingertips? One centralized place to find your productivity apps, your colleagues, teams collaboration, knowledge and idea sharing, event planning, communication… the list goes on. This is what an ‘intranet’ has the potential to be, so that’s why we’re doing it.

For the last 3 years we have been working to solve this problem, and we built a platform that combines the best ideas the intranet had, and adds more value for the modern office. An intranet solution should be the one place you go to find everything work related, it should be accessible everywhere, and give you all the tools you need to do your work.

Unlike the intranets of the past, employees themselves can have the power to create updates using an intuitive system. Knowledge can be presented in a relevant way, and everyone is empowered and encouraged to have a voice. This builds an extra lane for the typical one-way communication that traditional intranets got us accustomed to, while also using clever data-driven filters not to overload employees with information.

In case you don’t know us, Happeo is the leading all-in-one digital workplace platform that empowers internal communicators to connect with employees in entirely new ways. The platform brings together intranet, collaboration and social networking into one unified solution. Large enterprises and fast-growing organizations, such as Randstad Sourceright and Groupe Chantelle, use Happeo to reach, engage, and listen to more than 220,000 employees worldwide and unlock the value of employee engagement.

Happeo is having a big year, as we launched our new Amsterdam office, and announced our 8 million USD late seed investment at Google Next, we continue striving to make work a happier place. Creating an employee-centric and intuitive communications experience, to keep everyone up-to-date, engaged and connected is our aim. Ultimately freeing our customers to do what they do best, better.

To compare intranet solutions with our free guide, click here.