Different types of Feed Widgets in Happeo have some variation in how images are displayed, we explain the best practices here.

Different types of Feed Widgets have some variation in how images are displayed. In some Widgets, the first image of the post will appear as a background image. In others it will appear at the top of the card. However, we won’t recommend choosing or cropping the image based on the Feed Widget usage since it’s only a smaller or shorter appearance of the original: the post itself.

Many Feed Widgets have Default image-settings which display a default image if the post / page does not have one (see size recommendations individually for list types).

On this image you can see how the same image is displayed on different types of Feed Widgets.

Choose News Feed when you want to quickly display multiple posts or pages in a small and short space and the text-content is more important than the image. It has been made to replace list type Tiny.

Images are displayed in small thumbnail size; from 86x86px to 140x140px depending on the width of the column. If the column is narrower than 300px, the thumbnail image won’t be displayed at all. We encourage using the News Feed type in the sections divided for two or three columns, not as full section width. 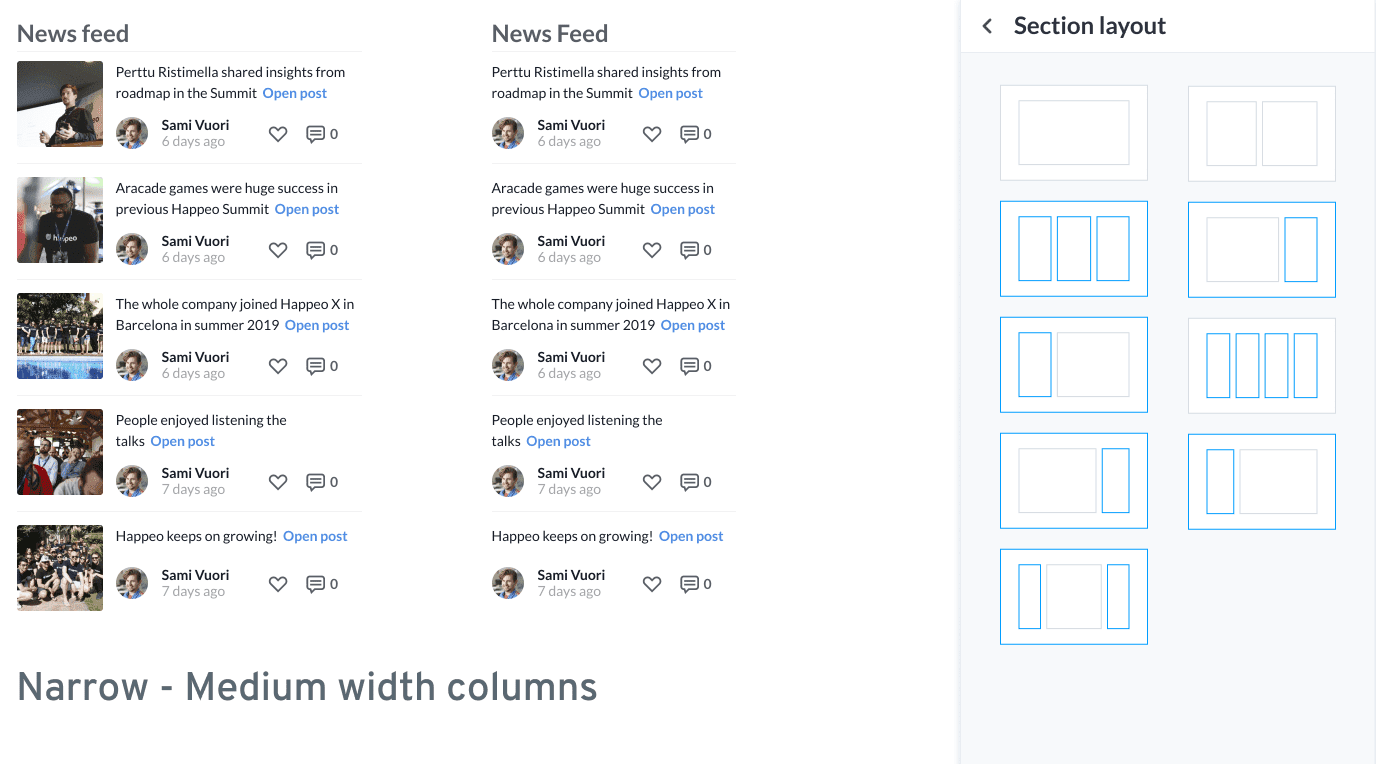 Blog Feed displays a horizontal list of cards which is familiar from many blogs. It may include a headline, the main hero image and start of the body text, thus being great for introducing an article which is a bit more in-depth.

The height of the image is always 142px, but the width (from 224px to 338px) is dependent on the width of the column. This adaptability causes some cropping for images (cropping rules mentioned above). Blog Feed is recommended to use on full-width sections since it arranges the posts horizontally. 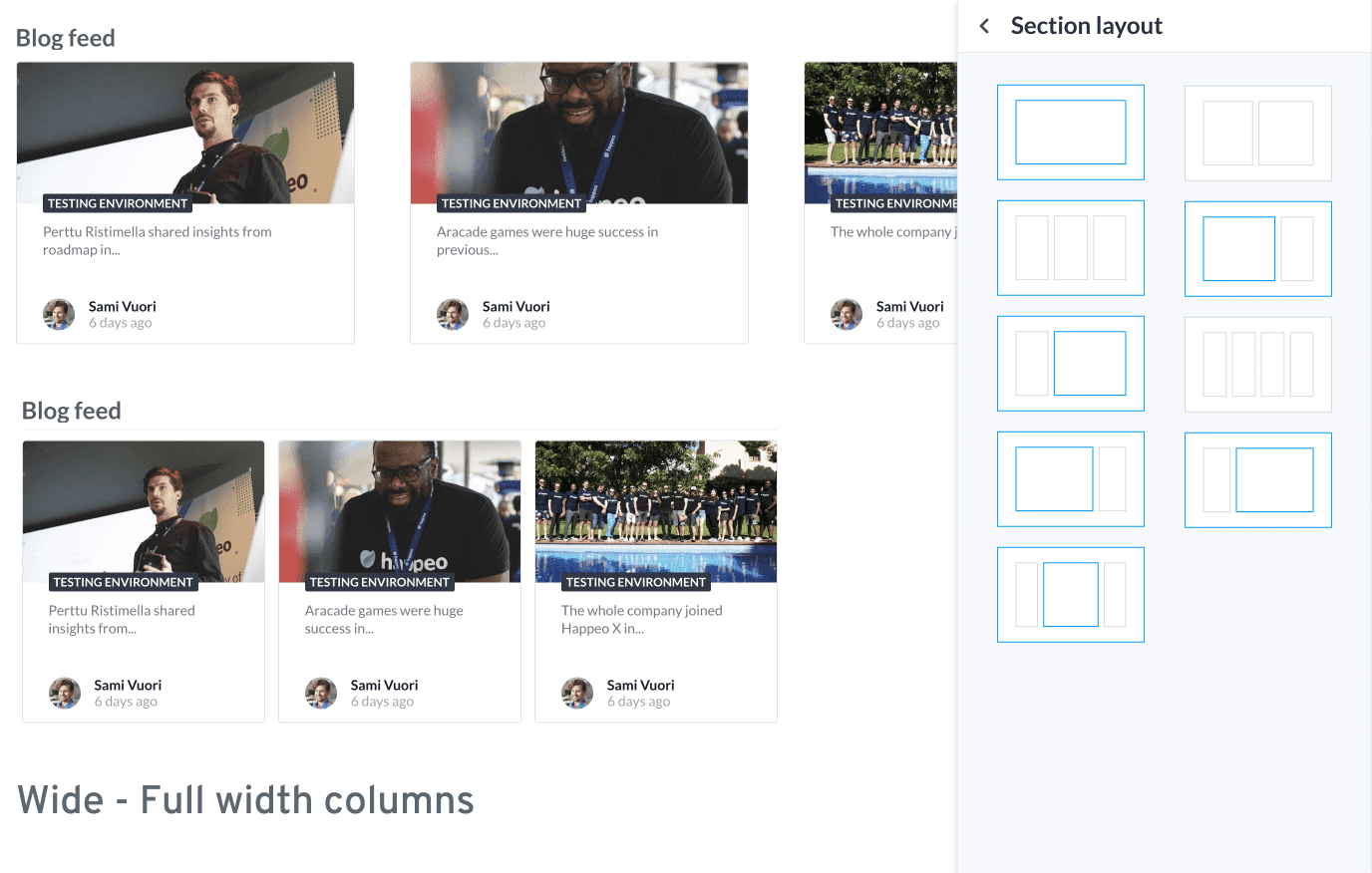 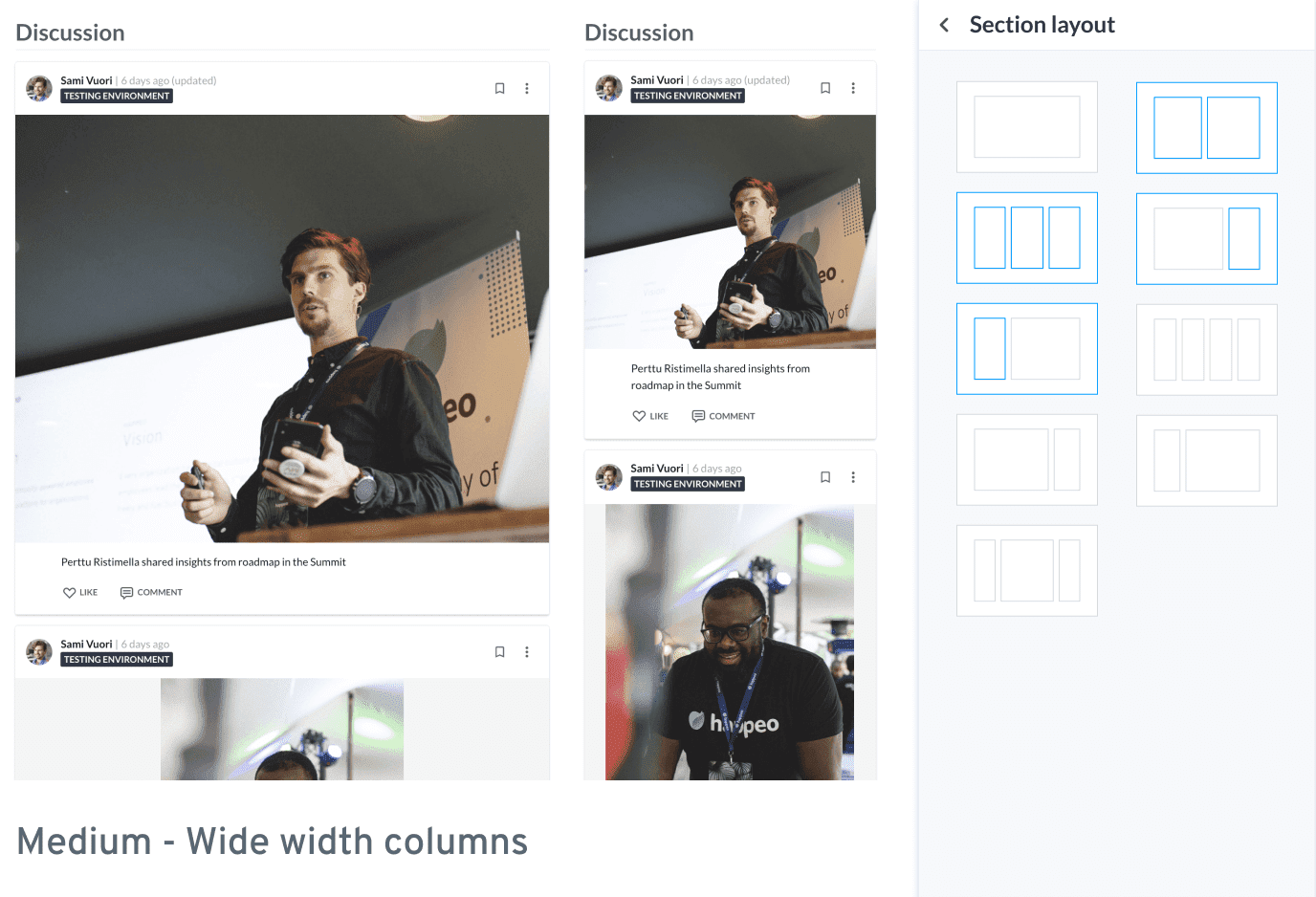 We recommend using Banner instead of News which looks quite similar but is a newer and more flexible version of News.

News is visually exactly the same as News in MyStream. Posts have a background image and text is layered white on top. For the section layout we recommend to use this on the medium to small width columns which are max half of the section width. Size recommendations are the same as for any post. 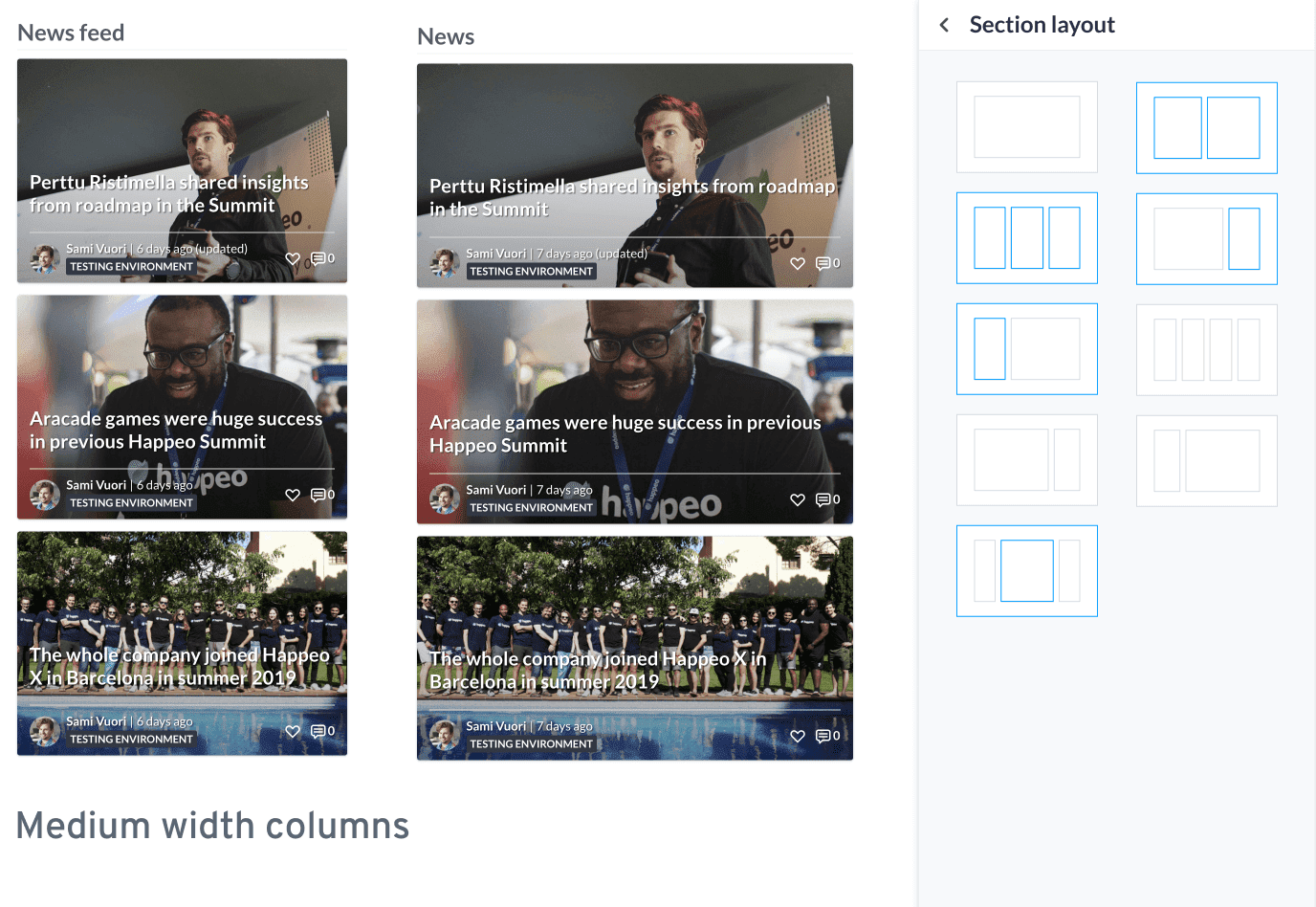 Carousel is a good option when you want to give high emphasis on a single post at a time. The post changes automatically every 7 seconds. Image is displayed on the background and the headline (or first words of the post) are displayed on top of the image.

The maximum height of the image is 360px but the width is again defined by the column width. For that reason we recommend using this Feed Widget in the medium width columns. Full section wide column may bring challenges with the images since the aspect ratio will be very wide and panoramic. 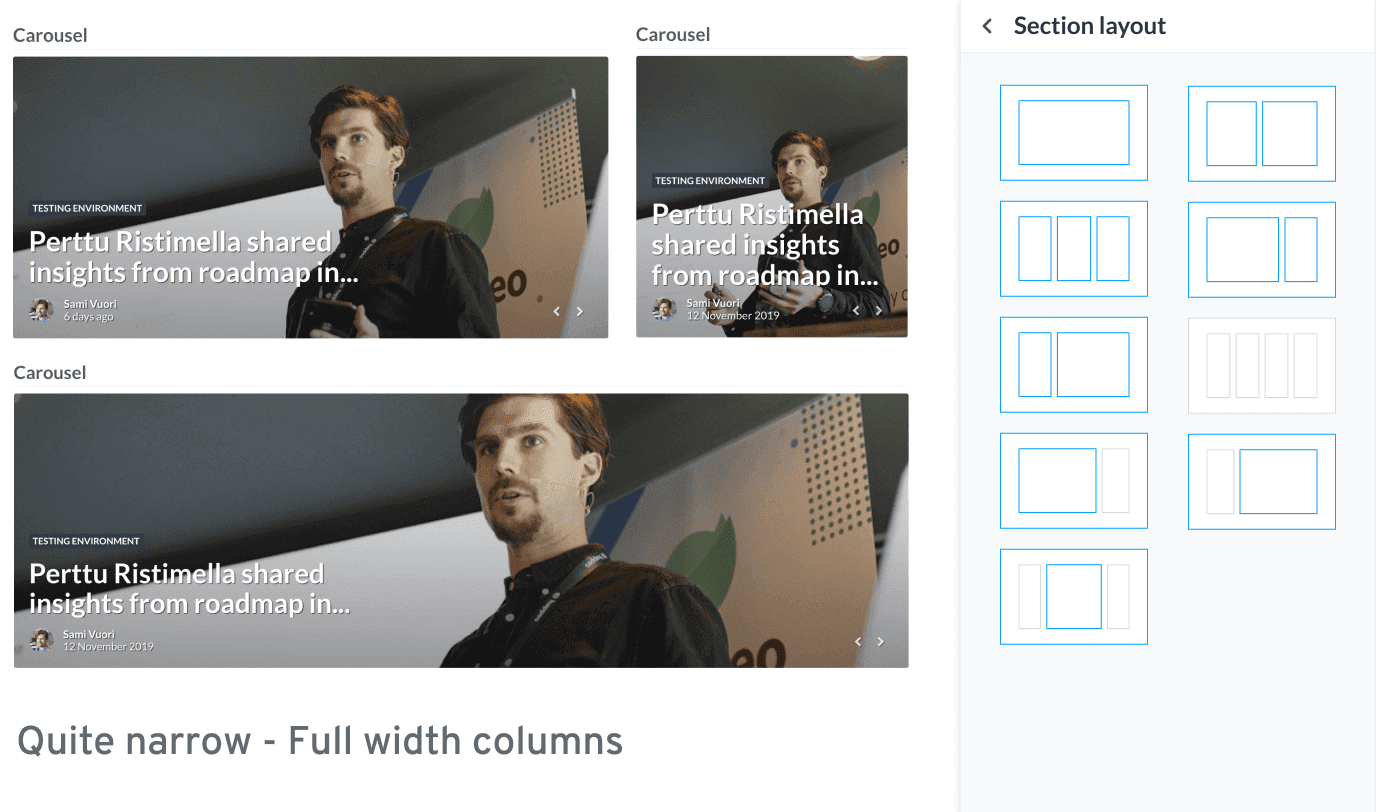 We recommend using News Feed instead of Tiny which is similar but newer and improved version of Tiny.

Banner is our most flexible Feed Widget and it is a really good option when you want to grab attention and give high emphasis for the feed. We recommend using it in full-width sections or wide columns with odd amounts like 3 or 5 in the Max posts -setting. It also works well in narrow columns since posts are then automatically flipped into vertical lists. 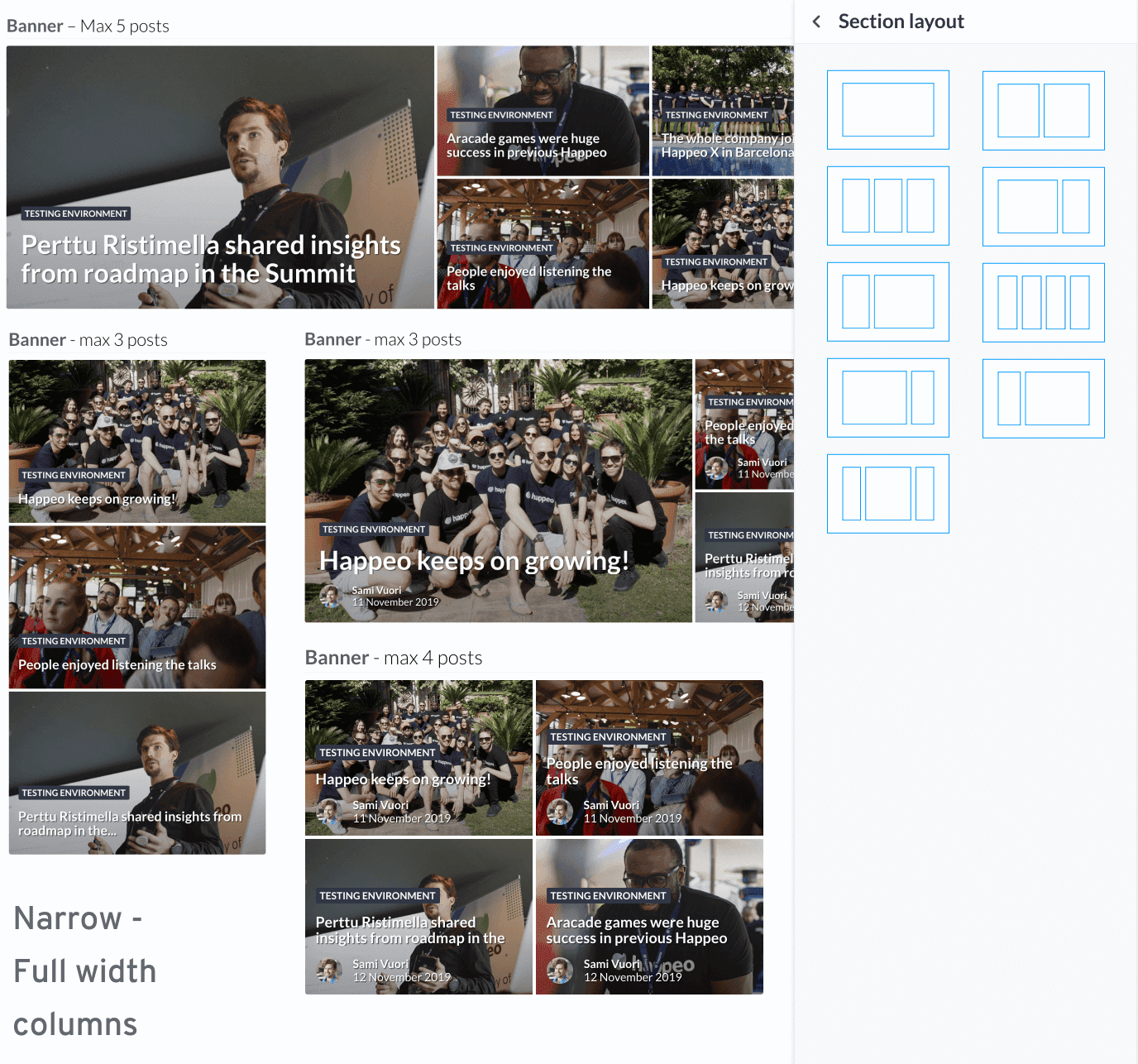 Mix is a combination of Banner and News feed. First post is displayed very big like in a Banner and the rest of the posts are on News feed.

We don’t really recommend using Mix anymore since users might not always understand the posts are coming from one and the same feed, and they might miss some important post because of that. We recommend using Banner or Carousel on the left side and News Feed on the right, including different sources for the streams. Size recommendations are the same as for the Banner.